VistaGen Therapeutics Inc. (NASDAQ: VTGN) is a biopharmaceutical company committed to developing and commercializing a new generation of medications that go beyond the standard of care for anxiety, depression and other central nervous system (CNS) disorders.

The company is headquartered in South San Francisco, California, the “Birthplace of Biotechnology,” among the largest cluster of biotechnology companies in the world.

VistaGen currently has three innovative CNS drug candidates in its pipeline: PH94B, PH10 and AV-101. With a differentiated mechanism of action and an exceptional safety profile in all clinical studies to date, each of VistaGen’s three drug candidates offers significant commercialization potential in multiple large CNS markets.

Fast-acting (10-15 minutes), non-systemic and non-sedating in Phase 2 clinical studies, PH94B is a first-in-class neuroactive nasal spray that, administered in microgram doses, binds to chemosensory receptors in the nasal passage that trigger neural circuits responsible for suppressing fear and anxiety caused by stressful social or performance situations.

PH94B is currently being developed as an acute treatment of anxiety in adults with Social Anxiety Disorder (SAD). In December 2019, PH94B became the first drug candidate to be granted Fast Track designation by the U.S. Food and Drug Administration (FDA) for development of a treatment for SAD, positioning it to potentially become the first FDA-approved fast-acting acute treatment for adults with the anxiety disorder, if planned Phase 3 studies are successful.

A successful Phase 2 program has been completed, and, after achieving consensus with the FDA in mid-2020 that the design of its Phase 3 studies of PH94B in SAD may mirror the design of the highly statistically significant (p=0.002) Phase 2 public speaking study of PH94B in SAD, the company’s preparations for pivotal Phase 3 clinical development of PH94B are underway.

To support Phase 3 development and commercialization of PH94B for anxiety disorders in large anxiety disorder markets in Asia, VistaGen recently entered into a strategic licensing and collaboration agreement with EverInsight Therapeutics, a company formed and currently funded by a large global venture capital firm, CBC Group. The company received a $5 million non-dilutive upfront license payment from EverInsight in August 2020. If Phase 3 development is successful, VistaGen is eligible to receive additional development and commercial milestone payments of up to $172 million, plus tiered royalties on sales of PH94B in Greater China, South Korea and Southeast Asia. VistaGen retains exclusive rights to develop and commercialize PH94B in all other markets.

VistaGen is also assessing potential Phase 2A clinical development opportunities to evaluate PH94B in a range of other anxiety disorders, including:

Upon self-administration, a microgram-level dose of PH10 sprayed into the nose binds to nasal chemosensory receptors that, in turn, activate neural circuits in the brain that lead to rapid-onset antidepressant effects, without side effects, systemic exposure or safety concerns that may be caused by FDA-approved drug treatments for MDD, including oral antidepressants and intranasal esketamine.

In a published exploratory Phase 2A MDD study, PH10 demonstrated rapid-onset and sustained antidepressant effects without the serious psychological side effects and safety concerns of ketamine-based therapy.

Following successfully completed Phase 2A development of PH10 for MDD, the company is currently preparing for a Phase 2B program in MDD.

VistaGen is also assessing the potential for Phase 2A clinical development of PH10 in a range of other depression-related indications, including:

Part of a class of new generation investigational medicine in neurology and neuropsychiatry known as N-methyl-D-aspartate receptor (NMDAR) modulators, AV-101 is an oral prodrug of 7-chloro-kynurenic acid (7-Cl-KYNA), a potent and selective NMDAR glycine site antagonist. This drug candidate has the potential to serve as an innovative treatment for MDD and multiple neurological indications where current therapies are unsatisfactory.

VistaGen is currently evaluating AV-101, in combination with FDA-approved probenecid, in a range of neuropsychiatric and neurological indications, with both MDD and Neuropathic Pain already granted Fast Track designation by the FDA. The company is assessing the combination for a potential Phase 1B study to support a potential Phase 2A program in one or more of the following indications:

The global CNS therapeutics market is estimated to reach $130 billion by 2025. The market was valued at approximately $82.3 billion in 2017 and is anticipated to grow at a healthy CAGR of more than 5.93% from 2018 to 2025. Even before the onset of the anxiety- and depression-provoking stressors from the COVID-19 pandemic, this growth was expected to be driven by a rise in mental illnesses and increased awareness of psychiatric disorders (https://nnw.fm/K2m0s) – all likely to be amplified by the diverse impacts of the pandemic.

The two most common mental health conditions – anxiety and depression – cost the global economy an estimated $1 trillion each year. The impact of these conditions is particularly devastating among the young. Industry data suggest that approximately 20% of the world’s children and teens are affected by mental health conditions, and suicide is the leading cause of death among 15- to 29-year-olds (https://nnw.fm/oftNb).

VistaGen’s mission is to help address the unmet needs of patients suffering from CNS disorders whose current treatments are either inadequate or generate debilitating side effects and serious safety concerns, including risk of abuse and death.

“Now more than ever, the new generation anti-anxiety and antidepressant medications we are developing at VistaGen – PH94B, PH10 and AV-101 – are relevant, necessary and demand the highly-focused and passionate efforts of our team and partners, with the support of our stockholders, to advance them to patients whose lives are disrupted by anxiety and depression disorders,” VistaGen CEO and Director Shawn K. Singh said in his closing remarks at the company’s 2020 Annual Meeting of stockholders.

Shawn K. Singh, J.D. is the Chief Executive Officer and a Director of VistaGen. He has served on the company’s board of directors since 2000. He has nearly 30 years of experience serving in numerous senior management roles across multiple industries, including private and public biotechnology, pharmaceuticals, medical devices, venture capital, contract research and development, and law. Singh has a B.A. with honors from the University of California – Berkley. He has a J.D. degree from the University of Maryland Carey School of Law. He is also a member of the State Bar of California.

H. Ralph Snodgrass, Ph.D., is the Founder, Chief Scientific Officer and Director of the company. Snodgrass has more than 20 years of experience in the biotechnology field as a senior manager. He is recognized as an expert in stem cell biology, with over 28 years of experience using stem cells as biological research tools to promote development and drug discovery. He received a Ph.D. in immunology from the University of Pennsylvania. Snodgrass has published over 50 scientific papers with more than 17 patents and a number of patent applications.

Mark A. Smith, M.D., Ph.D., is VistaGen’s Chief Medical Officer He has over 20 years of pharmaceutical industry experience, primarily with CNS drug development. Smith has been a successful leader in the discovery and development of approximately 20 investigational new drugs. He has been a part of numerous CNS-related clinical trials. Smith received a bachelor’s and Master of Science from Yale University and a Doctor of Medicine and Doctor of Philosophy in Physiology and Pharmacology from the University of California – San Diego. He completed his residency in the psychiatry department at Duke University Medical Center.

Mark A. McPartland is the company’s Vice President of Corporate Development and Investor Relations. He has over 20 years of experience in senior management roles in corporate development and investor relations at both public and private companies. McPartland received his Bachelor’s in business administration and marketing from Coastal Carolina University. 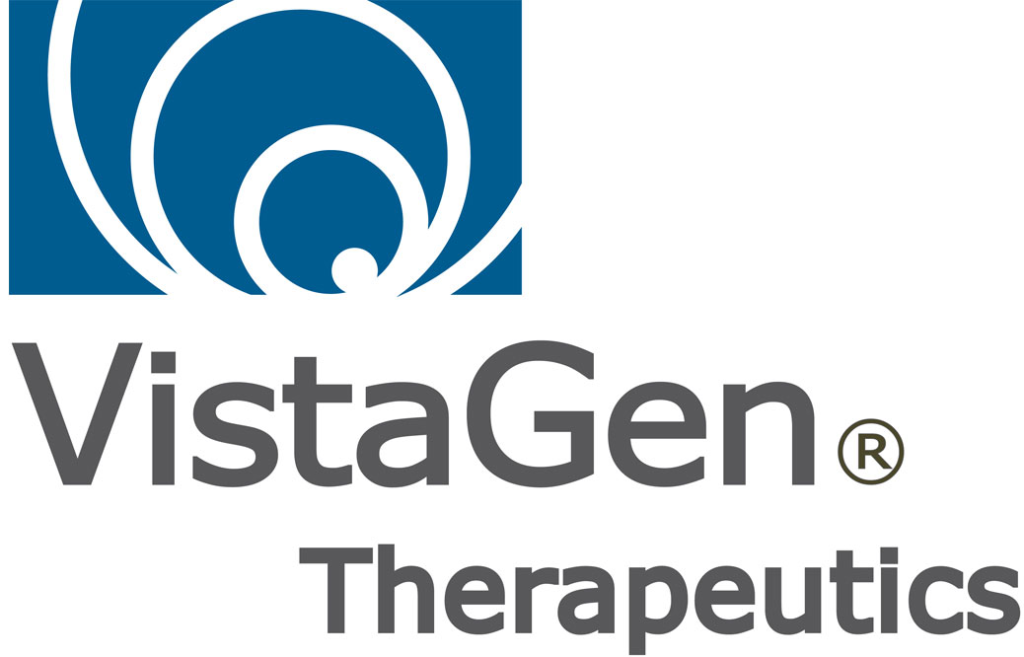