At the core of Vivos’ mission to rid the world of mild-to-moderate OSA is the Vivos System®, a revolutionary clinical breakthrough in the treatment of mild-to-moderate sleep apnea often caused by craniofacial anatomy development. The Vivos System® multidisciplinary treatment protocol involves collaboration between physicians, specially-trained dentists who have completed advanced training in craniofacial sleep medicine, and other ancillary health care providers.

In support of its growth strategy, Vivos has established contract manufacturing facilities in the U.S., Canada and Asia.

Craniofacial developmental deficiencies, such as underdeveloped upper and lower jaws, are among the leading causes of OSA. According to a 2019 analysis from researchers at the University of California, San Diego, an estimated 81 million adults in North and South America suffer from moderate to severe OSA. The United States has the highest amount of these patients, with approximately 54 million adults affected, according to the report.

Registered with the FDA as a Specification Developer, Vivos develops and markets a number of oral appliances. Its technology represents the first non-surgical, non-invasive and cost-effective treatment for the estimated hundreds of millions of people globally who suffer from mild-to-moderate OSA.

The system’s treatment protocol involves collaboration between physicians, specially trained dentists who have received advanced training in craniofacial sleep medicine, and additional health care providers. Vivos-trained clinicians can be found in almost every major city in the U.S. and in many countries throughout the world. The company’s oral appliances have shown to be effective in over 15,000 patients successfully treated worldwide by approximately 1,200 trained dentists.

A New Paradigm in Sleep Medicine

Vivos’ proprietary system poses the potential to be the biggest breakthrough in the treatment of mild-to-moderate OSA since CPAP.

The Vivos System has been specifically designed to promote the proper growth and development of the hard and soft tissues surrounding and comprising the oral cavity, nasal cavity, upper and lower jaws, and other tissues which together form and shape the upper airway. As these areas develop more fully using the Vivos System, a patient’s airway typically widens and expands, enabling them to breathe properly through their nose. With a more open and less obstructed airway, and easier nocturnal breathing, the symptoms of SDB tend to diminish over time, and patients often report they no longer suffer from the adverse effects of SDB or OSA.

Use of the Vivos System is variable and case dependent, but typically recommended to be worn daily for 12 to 16 hours starting in the early evening and continuing overnight. The total treatment time typically ranges from 12 to 24 months, with 18 months being the approximate mean treatment time. 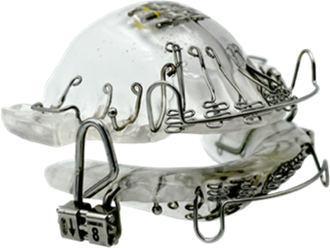 Combining technologies and protocols that can alter the size, shape and position of the tissues of a patient’s upper airway, the Vivos System opens airway space and can significantly reduce symptoms and conditions associated with mild-to-moderate OSA.

The Vivos System treatment is typically less than $10,000 and is often reimbursable by medical insurance as an out-of-network benefit.

A potentially serious medical problem with an alternative treatment therapy available in the dental office.

Hard and soft tissues of the craniofacial complex can be non-surgically enhanced using the proprietary Vivos® System devices and clinical protocols.

Dr. Dave Singh – Founder, Director
A doctor three times over in dental medicine, craniofacial development, and orthodontics, Dr. Singh was educated primarily in England and has lectured in North America, Europe, Asia, and Africa. The Global Summits Institute recently named Dr. Singh as one of the Top 100 Doctors in Dentistry.