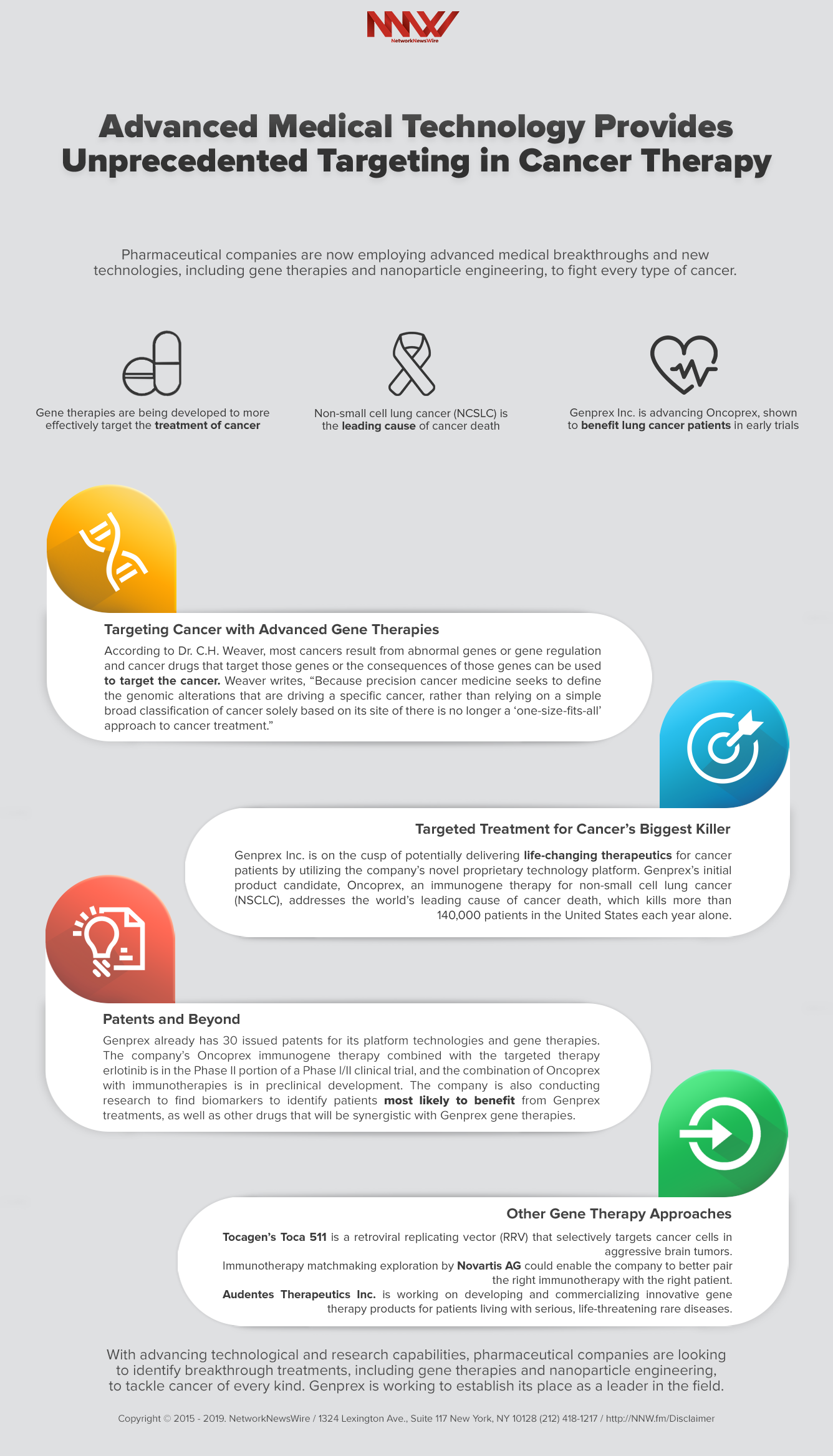 According to Dr. C.H. Weaver, most cancers result from abnormal genes or gene regulation, and cancer drugs that target those genes or the consequences of those genes can be used to target the cancer. Weaver writes, “Because precision cancer medicine seeks to define the genomic alterations that are driving a specific cancer, rather than relying on a simple broad classification of cancer solely based on its site there is no longer a ‘one-size-fits-all’ approach to cancer treatment.”

Oncoprex encapsulates TUSC2, a powerful proven tumor suppressor gene, in a cholesterol nanoparticle engineered to target cancer cells. As Genprex chairman and CEO Rodney Varner explained, “It’s a systemic targeted approach. We say that the treatment is ‘targeted’ because the lipid nanoparticles are designed to be attracted like a magnet to the cancer cells, and have an opposite charge.”

Administered intravenously and absorbed into tumor cells, Oncoprex then expresses proteins that are missing or found in low quantities. Oncoprex interrupts cell signalling pathways that cause the replication and proliferation of cancer cells, re-establishes pathways for programmed cell death in cancer cells, and modulates the immune response against cancer.

Genprex’s collaborators have demonstrated through tumor biopsies that its patented, targeted, nanoparticle delivery system provides up to 25 times greater uptake of the TUSC2 tumor suppressor gene, which is the active ingredient in Oncoprex, in tumor cells than in normal cells. Research has also shown that Oncoprex, in combination with targeted or immunotherapies, may be more effective than single drugs alone. As well as being a tumor suppressor, Oncoprex has shown to have a favorable safety profile relative to other lung cancer drugs, and to block mechanisms that create drug resistance.

Genprex states that “we believe that by combining Oncoprex with approved targeted therapies and immunotherapies, we can potentially expand the benefit of these approved lung cancer drugs into the large majority of patients who do not now benefit from them, either because the patients’ tumors do not have the molecular profiles that indicate effectiveness of those drugs, or because the patients have developed resistance to those drugs after receiving them for some period of time.”

In addition, the company notes that current targeted therapies generally only benefit patients with particular epidermal growth factor receptor (EGFR) mutations, which are a minority of patients. Pre-clinical and clinical trials suggest that Oncoprex, combined with existing targeted treatments, may be effective in fighting cancer in the population at large, regardless of EGFR mutation.

Genprex already has 30 issued patents for its platform technologies and gene therapies. The company’s Oncoprex immunogene therapy combined with the targeted therapy erlotinib is in the Phase II portion of a Phase I/II clinical trial, and the combination of Oncoprex with immunotherapies is in preclinical development. The company is also conducting research to find biomarkers to identify patients most likely to benefit from Genprex treatments, as well as other drugs that will be synergistic with Genprex gene therapies.

Given the enormous potential and unmet medical need, Genprex plans to apply for Fast Track, Breakthrough or RMAT designation from the FDA.

In 2008, Varner recognized the enormous potential in the science behind Genprex’s lead drug candidate, Oncoprex. A corporate lawyer for several biotech start-ups and a cancer survivor himself, Varner, along with several leading scientists, rescued what they believed was the most promising, undeveloped science of a bankrupt biotech: the TUSC2 tumor suppressor gene delivered to tumor cells through a novel nanoparticle delivery system. The group became the foundation of what is today Genprex.

Lead by Varner, Genprex boasts some of the world’s best scientific minds. Internationally renowned cancer expert and oncology pioneer Jack A. Roth, MD, FACS, is the chairman of Genprex’s Scientific Advisory Board. Genprex president Julien L. Pham, MD, MPH, was on the faculty at Harvard Medical School’s Brigham and Women’s Hospital (BWH) prior to founding a healthcare IT company.

Employing cutting-edge science, Genprex is establishing a new paradigm in the fight against lung cancer. Given the vast unmet global need and the breakthrough potential of Genprex’s pipeline, investors may want to keep the company on their watch list.

Tocagen’s (NASDAQ: TOCA) Toca 511 is a retroviral replicating vector (RRV) that selectively targets cancer cells in aggressive brain tumors. It delivers a gene for the enzyme, cytosine deaminase (CD). Through this targeted delivery, only infected cancer cells carry the CD gene and produce CD. The second part of Tocagen’s treatment is an investigational small molecule, Toca FC. This is an orally administered prodrug, 5-fluorocytosine (5-FC), which is converted into an anti-cancer drug, 5-fluorouracil (5-FU), when it encounters CD. 5-FU kills cancer cells and immune-suppressive myeloid cells resulting in anti-cancer immune activation and subsequent tumor killing.

Immunotherapy matchmaking exploration by Novartis AG (NYSE: NVS) could enable the company to better pair the right immunotherapy with the right patient. Novartis aims to answer the question: why do some patients respond to a therapy when other seemingly similar patients do not? Novartis AG scientists are using artificial intelligence (AI) to find clues. Novartis focuses on five key cancer areas where it has identified patient needs and promise within the company’s portfolio. Those areas are breast cancer, lung cancer, melanoma, kidney cancer and hematology.

With advancing technological and research capabilities, pharmaceutical companies are looking to identify breakthrough treatments, including gene therapies and nanoparticle engineering, to tackle cancer of every kind. Genprex is working to establish its place as a leader in the field.

BioMedWire (BMW) is a bio-med news and content distribution company that provides (1) access to a network of wire services via NetworkWire to reach all target markets, industries and demographics in the most effective manner possible, (2) article and editorial syndication to 5,000+ news outlets (3), enhanced press release services to ensure maximum impact, (4) social media distribution via the Investor Brand Network (IBN) to nearly 2 million followers, (5) a full array of corporate communications solutions, and (6) a total news coverage solution with BMW Prime. As a multifaceted organization with an extensive team of contributing journalists and writers, BMW is uniquely positioned to best serve private and public companies that desire to reach a wide audience of investors, consumers, journalists and the general public. By cutting through the overload of information in today’s market, BMW brings its clients unparalleled visibility, recognition and brand awareness. BMW is where news, content and information converge.

DISCLAIMER: BioMedWire (BMW) is the source of the Article and content set forth above. References to any issuer other than the profiled issuer are intended solely to identify industry participants and do not constitute an endorsement of any issuer and do not constitute a comparison to the profiled issuer. The commentary, views and opinions expressed in this release by BMW are solely those of BMW. Readers of this Article and content agree that they cannot and will not seek to hold liable BMW for any investment decisions by their readers or subscribers. BMW is a news dissemination and financial marketing solutions provider and are NOT registered broker-dealers/analysts/investment advisers, hold no investment licenses and may NOT sell, offer to sell or offer to buy any security.

The Article and content related to the profiled company represent the personal and subjective views of the Author, and are subject to change at any time without notice. The information provided in the Article and the content has been obtained from sources which the Author believes to be reliable. However, the Author has not independently verified or otherwise investigated all such information. None of the Author, BMW, or any of their respective affiliates, guarantee the accuracy or completeness of any such information. This Article and content are not, and should not be regarded as investment advice or as a recommendation regarding any particular security or course of action; readers are strongly urged to speak with their own investment advisor and review all of the profiled issuer’s filings made with the Securities and Exchange Commission before making any investment decisions and should understand the risks associated with an investment in the profiled issuer’s securities, including, but not limited to, the complete loss of your investment.

BMW HOLDS NO SHARES OF ANY COMPANY NAMED IN THIS RELEASE.