BioMedWire Editorial Coverage: After thirty years of development, gene therapy is seeing a surge of progress and profitability. 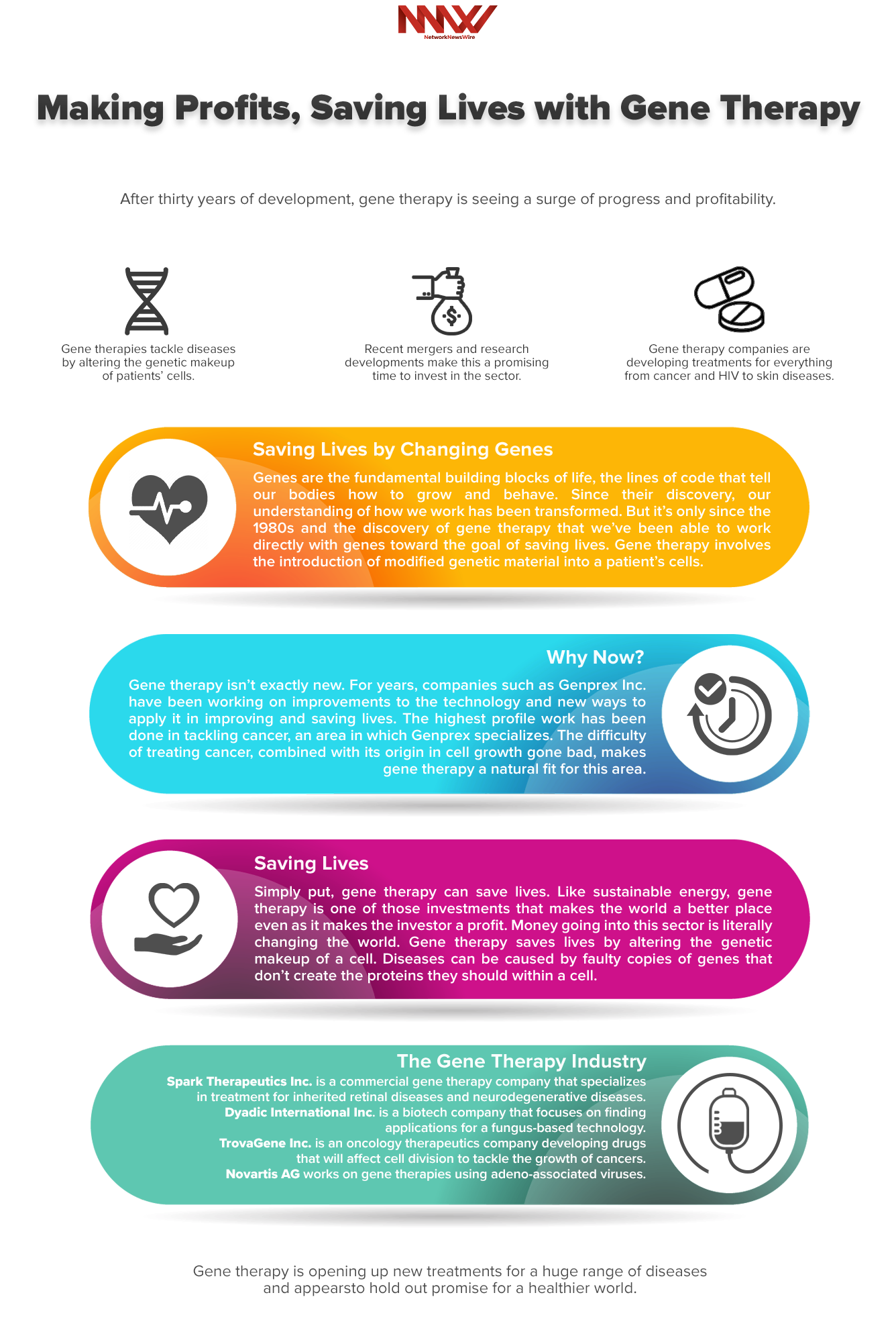 Genes are the fundamental building blocks of life, the lines of code that tell our bodies how to grow and behave. Since their discovery, our understanding of how we work has been transformed. But it’s only since the 1980s and the discovery of gene therapy that we’ve been able to work directly with genes toward the goal of saving lives.

Gene therapy involves the introduction of modified genetic material into a patient’s cells. Though gene therapy was first attempted on human cells in 1980, it took until 1989 for the first successful transfer of genes in a person. Early tests were dogged by challenges and controversy, but researchers persevered. More than 2,300 clinical trials of gene therapy were carried out between 1989 and 2016, providing a wealth of information about the workings of gene therapy, as well as the potential. Now, as the technology surges towards a wave of practical cures for patients, gene therapy has become a significant sector within the bioscience industry.

There’s never been a better time to buy into gene therapy.

Gene therapy isn’t exactly new. For years, companies such as Genprex Inc. (NASDAQ: GNPX) have been working on improvements to the technology and new ways to apply it in improving and saving lives. The highest profile work has been done in tackling cancer, an area in which Genprex specializes. The difficulty of treating cancer, combined with its origin in cell growth gone bad, makes gene therapy a natural fit for this area. But plenty of other uses have also been explored over the past three decades.

If gene therapy has been around for this long, why is now such an ideal time to invest?

One reason is that the industry has seen a series of mergers and acquisitions. Small-cap biotech company Spark Therapeutics, which specializes in gene therapy, was recently bought up by Roche for $4.8 billion, offering Spark investors a likely gain of 190 percent for this year. MeiraGTx Holdings, another small-cap gene therapy company, achieved an $80 million private placement, with Johnson & Johnson as its lead investor, pushing its shares up 67 percent so far this year. These and other moves show the interest of big medical companies in gene therapy.

This evidence of the faith of the markets has helped boost stock values for a range of gene therapy companies, with some seeing triple digit growth. But these companies don’t need to be the targets of mergers to benefit from this. A rising tide lifts all boats, and a shift in perspective that sees gene therapy as a mature and profitable endeavor increases confidence in companies such as Genprex, which are still working away in their own corners.

Another reason for the rising confidence in gene therapy companies — and a driver for these mergers — has been the successful development of new therapies. Recent research has seen developments in the use of gene therapy for a wide range of diseases, including such high profile and solidly funded areas as cancer and HIV.

This research has led to the development of new and exciting treatments. BioMarin is testing a gene therapy for hemophilia, which holds potential to more efficiently treat a difficult and expensive-to-tackle disease that can currently cost hundreds of thousands of dollars a year in treatment. Genprex is working on Oncoprex to tackle non-small cell lung cancer. News of promising results for a muscular dystrophy drug, alongside the purchase of a smaller gene therapy company, rallied shares in Sarepta Therapeutics and sent the stock up 34 percent in the first two months of 2019.

New therapies boost investor confidence and provide companies with more options, just like any tech innovation. And because of the special nature of their work, these companies do much more than that.

Simply put, gene therapy can save lives. Like sustainable energy, gene therapy is one of those investments that makes the world a better place even as it makes the investor a profit. Money going into this sector is literally changing the world.

Gene therapy saves lives by altering the genetic makeup of a cell. Diseases can be caused by faulty copies of genes that don’t create the proteins they should within a cell. The insertion of better genes can restore function to the cell, building a healthier body from the most basic building blocks up. That’s why the work of companies such as Genprex can be so transformative.

Delivery systems for the genes are as important as the genes themselves. Carriers called vectors deliver the genetic material into the cells. These are often viruses, turning a life form that is hostile to humanity into one that benefits us. In the case of Genprex’s Oncoprex treatment, the genes are carried in an intravenously delivered nanovesicle, or a tiny compartment like those found in cells. The Oncoprex nanovesicle is small enough to cross barriers into the lungs, where it can deliver its genetic material to the cancer site.

Once in the lungs, the drug targets the negatively charged cancer cells. It’s taken into the cells, where it produces a protein that can restore failing functions caused by the cancer. The treatment interrupts the pathways that cause cancer cells to reproduce and rebuilds the pathways that lead these cells to die. It also blocks mechanisms that cause resistance to anti-cancer drugs.

Advancements in gene therapy over the past thirty years have led to a range of companies specializing in this area.

Spark Therapeutics Inc. (NASDAQ: ONCE) is a commercial gene therapy company that specializes in treatment for inherited retinal diseases, neurodegenerative diseases and diseases that can be treated through the liver. The company tackles rare inherited diseases at their root by treating mutated genes, augmenting, suppressing or replacing those genes, depending upon how they negatively affect the body. The company’s expertise and technology has drawn the attention of the Roche Group, and the two entered into a merger agreement in February. Spark will continue to operate as an independent company within the Roche Group but with the benefit of that group’s substantial financial backing.

Based in Florida and the Netherlands, Dyadic International Inc. (OTCQX: DYAI) is a biotech company that focuses on finding applications for a fungus-based technology that the company has nicknamed C1. This can be used to increase the speed and efficiency with which drugs are created. The technology is used in a wide range of treatments, including vaccines, antibodies and enzyme therapies. The company placed at No. 36 on the 2019 OTCQX Best 50 list, a list of the top 50 companies listed on the OTCQX market.

TrovaGene Inc. (NASDAQ: TROV) is an oncology therapeutics company developing drugs that will affect cell division to tackle the growth of cancers. The company’s treatments work by using a Polo-like Kinase 1 (PLK1) Inhibitor, which reduces the overexpression of an enzyme common in cancer cells. By changing cell division and the repair of damage within the cell, these treatments are designed to save the lives of cancer patients. TrovaGene currently has two ongoing clinical trials and will be reporting on its progress at the American Association for Cancer Research Annual Meeting in April.

Novartis AG (NYSE: NVS) is working on gene therapies using adeno-associated viruses (AAVs) to deliver the treatment. The company uses innovative science and technology to address some of society’s most challenging healthcare issues. Recent research by Novartis has shown successful results in treating patients with the skin condition psoriasis, with nine out of ten patients achieving clear or almost-clear skin during the first 16 weeks of treatment. The company is also working on issues such as cardiovascular disease.

Gene therapy is opening up new treatments for a huge range of diseases and appears to hold out promise for a healthier world.

BioMedWire (BMW) is a bio-med news and content distribution company that provides (1) access to a network of wire services via NetworkWire to reach all target markets, industries and demographics in the most effective manner possible, (2) article and editorial syndication to 5,000+ news outlets (3), enhanced press release services to ensure maximum impact, (4) social media distribution via the Investor Brand Network (IBN) to nearly 2 million followers, (5) a full array of corporate communications solutions, and (6) a total news coverage solution with BMW Prime. As a multifaceted organization with an extensive team of contributing journalists and writers, BMW is uniquely positioned to best serve private and public companies that desire to reach a wide audience of investors, consumers, journalists and the general public. By cutting through the overload of information in today’s market, BMW brings its clients unparalleled visibility, recognition and brand awareness. BMW is where news, content and information converge.

DISCLAIMER: BioMedWire (BMW) is the source of the Article and content set forth above. References to any issuer other than the profiled issuer are intended solely to identify industry participants and do not constitute an endorsement of any issuer and do not constitute a comparison to the profiled issuer. The commentary, views and opinions expressed in this release by BMW are solely those of BMW. Readers of this Article and content agree that they cannot and will not seek to hold liable BMW for any investment decisions by their readers or subscribers. BMW is a news dissemination and financial marketing solutions provider and are NOT registered broker-dealers/analysts/investment advisers, hold no investment licenses and may NOT sell, offer to sell or offer to buy any security.

The Article and content related to the profiled company represent the personal and subjective views of the Author, and are subject to change at any time without notice. The information provided in the Article and the content has been obtained from sources which the Author believes to be reliable. However, the Author has not independently verified or otherwise investigated all such information. None of the Author, BMW, or any of their respective affiliates, guarantee the accuracy or completeness of any such information. This Article and content are not, and should not be regarded as investment advice or as a recommendation regarding any particular security or course of action; readers are strongly urged to speak with their own investment advisor and review all of the profiled issuer’s filings made with the Securities and Exchange Commission before making any investment decisions and should understand the risks associated with an investment in the profiled issuer’s securities, including, but not limited to, the complete loss of your investment.

BMW HOLDS NO SHARES OF ANY COMPANY NAMED IN THIS RELEASE.